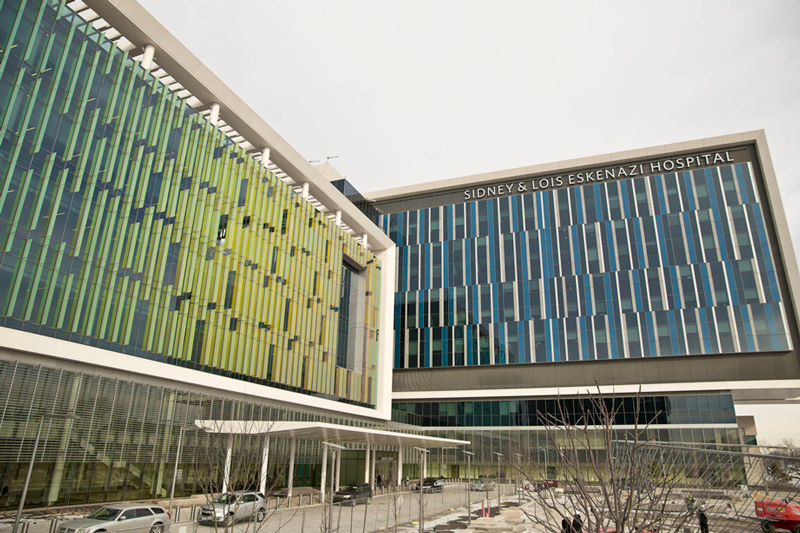 Currently on track to become the nation’s first certified LEED® Silver hospital, the $754 million new Sidney & Lois Eskenazi Hospital and Eskenazi Health campus in Indianapolis placed a considerable emphasis on green design. One of the project team’s foremost sustainable design goals was for the facility’s mechanical system to meet the American Society of Heating, Refrigeration, and Air-conditioning Engineers (ASHRAE) Standard 90.1 requirements, while providing the highest indoor environmental quality for patients.

An integral component of this strategy was the proper sealing of the ductwork of the HVAC system, which was then covered with fiberglass duct wrap. Alloyd Insulation Company, Inc., of Dayton, Ohio, was contracted to install the pipe insulation and duct insulation for the 1.3 million-square-foot, 11-story hospital; the galvanized steel ductwork was fabricated by Bright Sheet Metal Company, Inc., of Indianapolis.

Alloyd Insulation Company began work in 2011 with a crew of 15, ready for an expansive, high-profile job. Due to the size and scope of the project, ductwork ranged in size from 6-inch round to giant 8-foot x 8-foot square ducts. With the ducts already having been installed with other system components around them, accessing the ductwork was the biggest challenge of the project.

“As is often the case with hospital projects, the duct goes in first, everything else goes in below it, and good luck getting to it,” says David Hines, field superintendent for Alloyd Insulation Company. “You sometimes had to climb up on top of the duct, drill a hole in the concrete slab above and screw in an anchor for hooking up our safety harnesses. We just had to use a lot of extra safety precautions on this project. It certainly made the job more time-consuming, but everything went well, and it was a great project.”

The crew was often working off hydraulic lifts at heights of 25 to 30 feet. Another daunting part of the installation came when the crew was working on large ductwork in the elevator shafts. Safety equipment and careful steps were key in those areas.

“These shafts ran from the basement to the floor, and there were a lot of big ducts there that we needed to wrap,” Hines says. “You’d walk out there on a board and look down and realize it’s about 100 feet down. So, in those areas, we had to incorporate additional safety measures.”

Fortunately, the crew made it through the project without a scratch, finishing the project on schedule last fall. All told, they installed about 300,000 square feet of SoftTouch duct wrap. Despite all of the project’s logistical challenges, the installation ran smoothly, thanks to the easy handling of the duct wrap. The product’s soft fibers and mat integrity make it easier for crews to cut and install—one of the main reasons the contractor uses it often.

“We use SoftTouch on a lot of our projects,” says Hines. “It cuts cleaner and just doesn’t seem to cause as much itching on our installers as other fiberglass insulation products do. The less itch, the better. When the crew doesn’t have to worry about getting too many glass fibers on their hands, they’re more productive and can install the insulation faster.”

“It turned out to be a really good project for us,” Hines says. “Everything went well, overall, and we are happy we were a part of it.”

How Insulation is Made: Sand to Glass to Fiber Glass